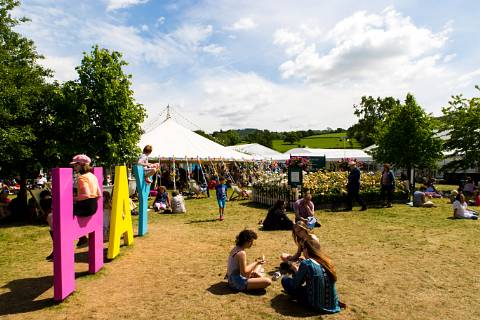 I’ve just returned home to a healthy workload following a wonderful week in Wales – during which I made my first ever pilgrimage to the Hay Festival.

In a previous blog post I stated a New Year’s resolution to attend more literary (and other) events during 2016. Setting out on this mission, I began with a talk by the very funny and inspiring Joanne Harris at the University of East Anglia Literary Festival in April. Then I eagerly awaited the Hay Festival, having enjoyed listening to many seminars and workshops from previous events online.

And I was most certainly not disappointed! The event was a feast for the senses. Visually vibrant, with a welcoming and stimulating atmosphere, the festival site was its own little community.

Unfortunately one of the events I had booked to attend was cancelled, but I was still able to hear former Director-General of the National Trust Fiona Reynolds deliver a passionate address on the subject of beauty, in a world that is increasingly ruled by economic considerations.

Then, in the evening, my partner and I returned to Hay-on-Wye to see the ever-flamboyant and irrepressible Brian Blessed – now of OBE status, of course. Despite the near tropical conditions inside the tent, the audience enjoyed a raucous romp through Brian’s career, with plenty of hilarious anecdotes.

And then it was all over for the year…

…but I already have my eye on a return visit!